Some questions we are often asked at Kings Cross Osteopathy are related to getting comfortable at night when dealing with back or neck pain. There are no simple answers to this question and much depends on personal preference. Even with the same condition, people may not find the same relief. Here are some strategies that you may find useful.

Mattress choice: This is almost entirely up to personal preference. There are no conclusive studies on what kind of mattress is best for back pain. There is an urban myth that the Japanese don’t suffer from back pain as they sleep on the floor or a hard futon; therefore sleeping on a hard mattress is best for back pain. I can assure you that back pain is just as prevalent in Japan as any other country. In fact, there are more convincing arguments that as soft a mattress as tolerable will support the spine better than a hard one.

The theory behind the argument for soft mattresses is as follows. The heaviest points of contact with the mattress in any position (except lying completely flat, face down.) are the hips and the shoulders. Thinking of the spine as the line that connects the two structures, a harder mattress will create more side bending than the soft one that allows the shoulders and hips to sink in.

This is just a theory. Whatever positions you find comfortable is best for you.

Pillow Choice: Again, I would defer to whatever setup makes you comfortable enough to get to sleep. Some useful information here would be that supporting the neck is actually the most important function of a pillow. Whether hard or soft, the neck must be supported to allow it to be in a neutral position, as if you were upright and facing forward. Orthopaedic style pillows do this with a lump that supports the neck, and a lower platform for the head. You can recreate this effect (side lying) by using a rolled up towel to bolster the space between your shoulder and neck, and have the pillow/s behind to support the head.

Pillows between the knees can be useful for relieving back pain when on your side, and under the belly and hips when on your front. This won’t work for everyone, but worth a try.

My patients often ask the question, ‘Why do I have the posture I have?’ Is it nature or nurture? Not an easy question to answer.

Healthy spinal curves and a ‘good’ posture will be influenced by the size and orientation of the spinal vertebra, dictated by genetics. But as an Osteopath, I know that it is possible to influence your ‘natural’ posture with treatment and specific exercises.
END_OF_DOCUMENT_TOKEN_TO_BE_REPLACED

This week I have been measuring quite a few people’s body fat levels.

I use it as a way of tracking progress for those who are looking to lose weight,

and also to find out the amount of fat a person has internally (because even skinny people can be fat inside).

Anyway one guy in his 50’s, who had the typical male middle age spread (around his belly)

The other day I was introduced to a guy who had a lower back issue.

He’d been suffering with this discomfort for many years and was seeing a physio for treatment.

I nearly fell off my seat in disbelief!

EVERY WEEK FOR 5 YEARS?!

I couldn’t help myself, I had to say the obvious thing…
END_OF_DOCUMENT_TOKEN_TO_BE_REPLACED

I don’t know about you but I start turning to sweet and warming food and drink as an emotional pick-me-up from the cold and wet weather.

Around this time of the year my training starts to slack of and I start to become a weaker, chubbier version of myself.

In the past this has then led to the onset of a recurring lower back issue which has caused me a lot of pain, discomfort and time off from work.

But I’m not the only one… END_OF_DOCUMENT_TOKEN_TO_BE_REPLACED

As a therapist, one of the worst things we can hear from a patient is;

“It’s just not getting any better”

A uni tutor once said to me;

“If someone isn’t getting better it’s one of three things;
– The therapy is wrong for the patient
– The practitioner
– The patient”

And you know what this is so true.
END_OF_DOCUMENT_TOKEN_TO_BE_REPLACED

I’m serious about this. People will not get better because they simply aren’t ready to.

It sounds ridiculous doesn’t it?!

But think about it for a second. Since we all have physical pain in common let’s use that as an example.

How much pain were you in before you decided to seek treatment for it?

What became so painful that you had to do something about it?

Was it the actual pain?

Or was it the thought of not being able to work? Or go to the gym? Or to play with your kids?

There’s an old saying that goes;

“People won’t change until the pain of not changing is greater than the pain changing brings.” by Just B. Jordan

We see pain all the time, people coming in with back pain, neck pain, knee pain, all sorts of aches and pains.

People who come in for treatment will generally improve, but how much is up to them.

Unfortunately a lot of people never fully improve because they are not fully committed, and then they have to live in discomfort.

When they are given “homework” to do, they only do it sometimes, and sometimes is not enough!

So here’s the thing.

We can see what the problem is and we know what you need to do to fix it, but it’s up to you to do it.

Find something that will get you results

and COMMIT to it!

Booking in with us for a treatment!

The other morning I was on my way to work.

It was a normal day like every other day, coffee in the cup holder, listening to a geeky podcast and enjoying the comfort of my car.

The car hops forwards as the car behind me came smashing in to the back of me!

Oddly enough I was super cool, strange because situations like that would make me super shaky!

Anyway, the guy was alright and was probably more shaken than me. He wasn’t paying attention and by the time he looked up it was too late!

We exchanged details and so follows hours of phone calls to all the necessary companies.

There wasn’t actually that much damage and aside from a slight ache in the lower back I was fine too.

But the ache didn’t go away and continued to remain stiff even a couple of weeks after.

If only I knew some therapists who could help!

Well funny you should mention that… I work with Steven and Luke.

At this point I hadn’t already had a treatment with Steven so I booked myself in with him.

If you don’t know who Steven is, he is the guy who does sports massage for us. He has a Batchelors in Osteopathy but never finished the course so can’t call himself an Osteopath, but his level of knowledge is INSANE! Probably knows more than me!

Although I was expecting the usual kind of sports massage I was most impressed with how Steven worked. He looked at me totally holistically and treated above and below the area of pain, including some stretches and active release techniques.

So if you want a thorough sports massage treatment then get yourself booked in with Steven today!

Speak to you soon 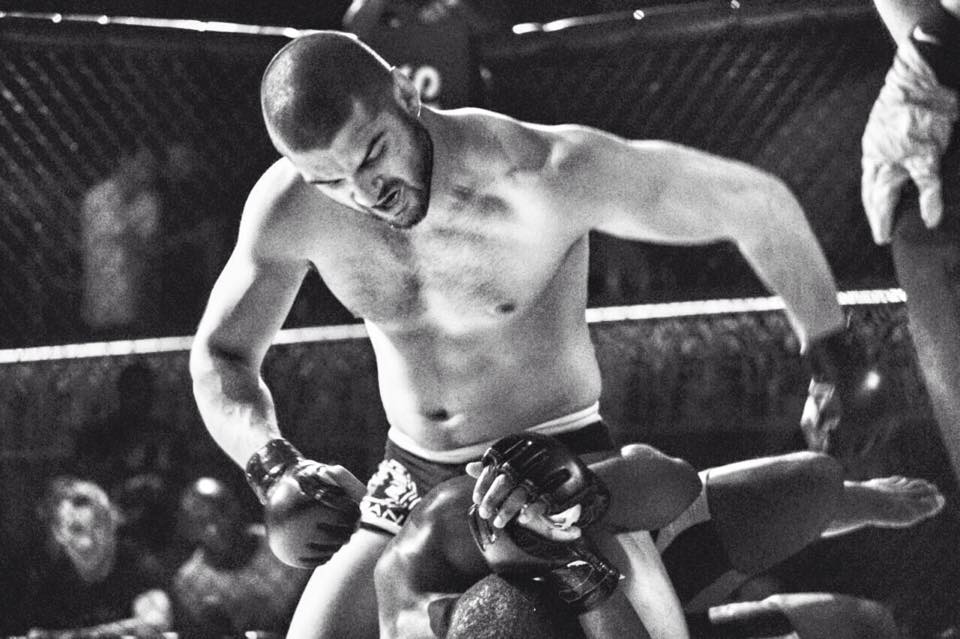 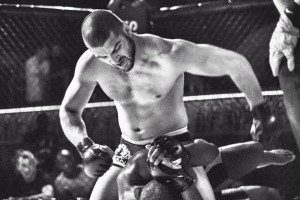 George is always in the gym training, with a professional attitude, putting in the hard work.

Last weekend George had a title fight and won the belt so well done George!

Below is a short video of George having his neck loosened up in treatment!

A few weeks ago, one of the guys in the gym came up to me and said “Ash I’ve hurt my foot, can you take a look?”

A fairly standard opener in the gym!

Upon initial inspection, the outer edge of the foot looked quite swollen on both the top and bottom, and based on how the injury occured (twisting the foot over at the bottom of an escalator) I suspected a 5th Metatarsal Fracture (a fairly common fracture, particularly in sport).

I pulled out my 128 Hz Tuning Fork, made it vibrate and placed it on the outside of the foot, a practice I have done many times before but without much result.

Immediately after taking the tuning fork off the patient said that the pain was increased, which is a sign of a fracture!

The test has a high specificity but a negative result doesn’t mean there is no fracture and if suspected it should always be further investigated.

I suggested to the patient that he went and got an X-Ray because of the suspicion of a fracture, which he later did.

The result couldn’t have come back any better for me (although not so good for the patient)!

Below is a copy of the X-Ray taken; 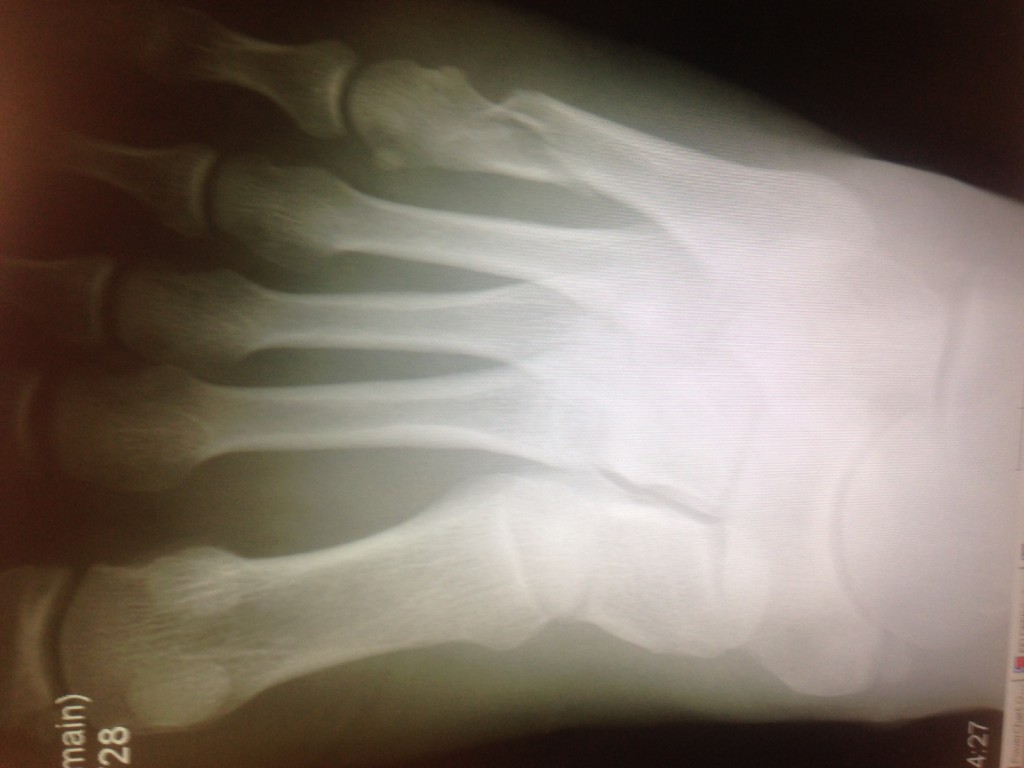 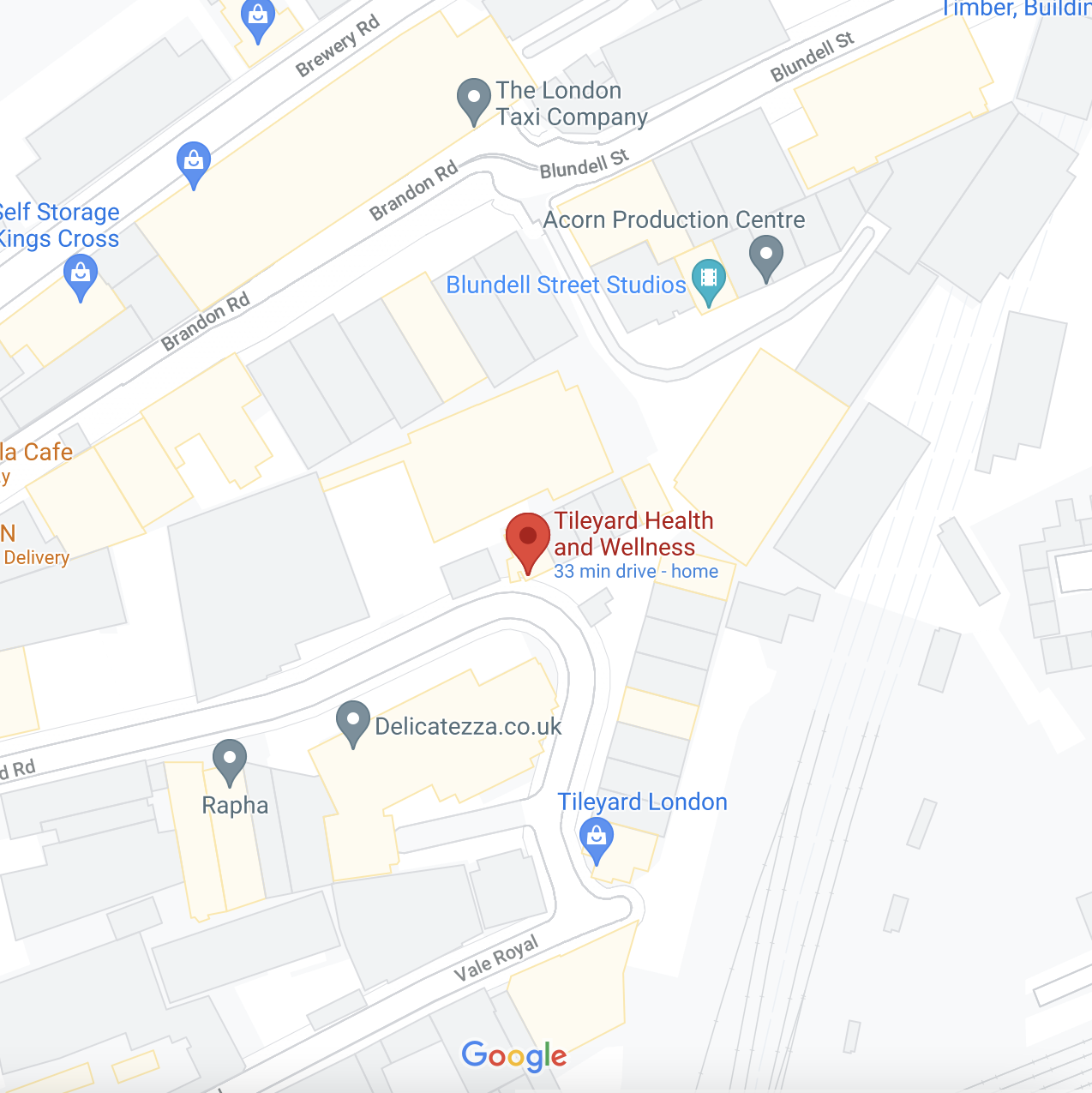 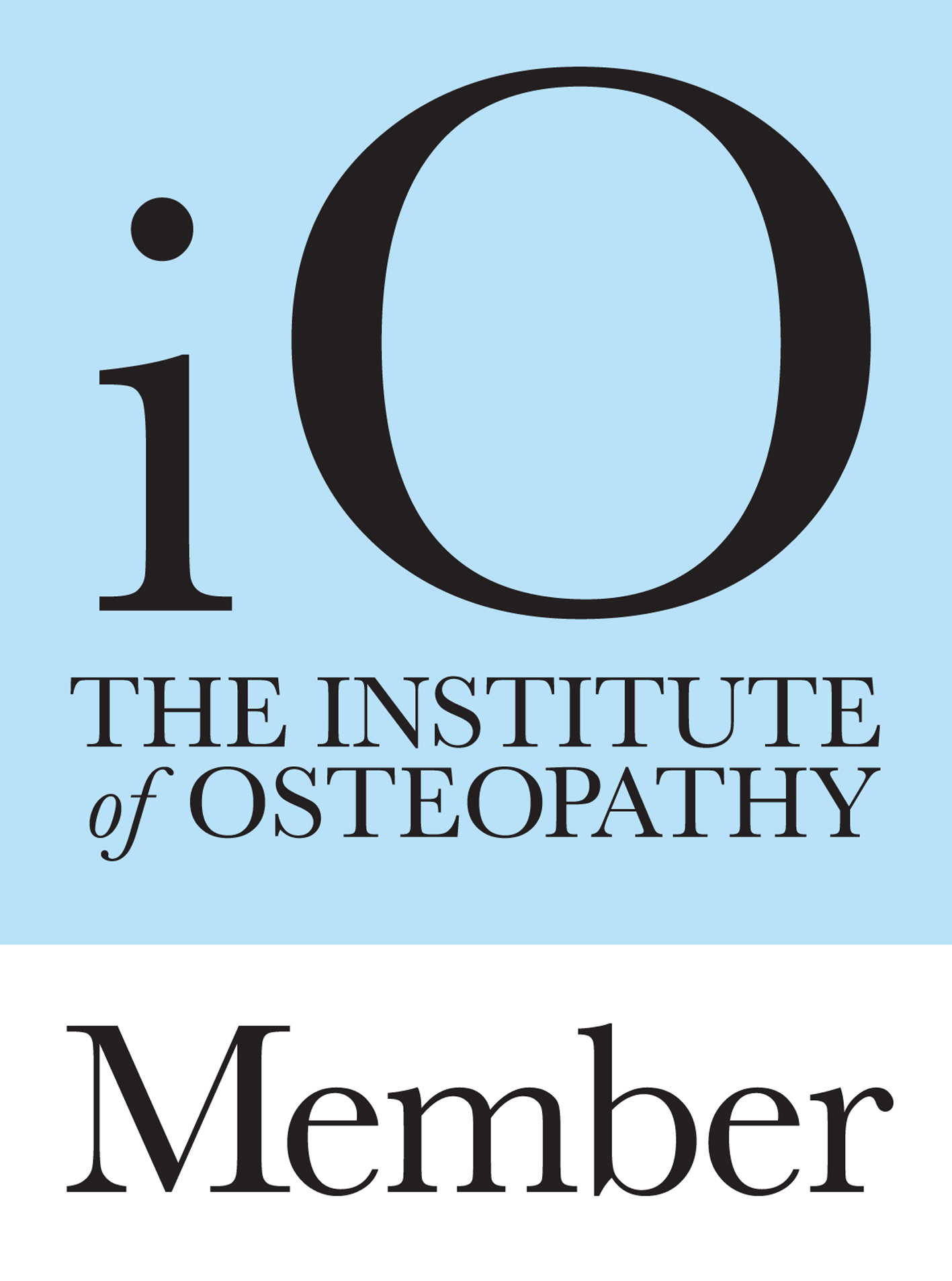